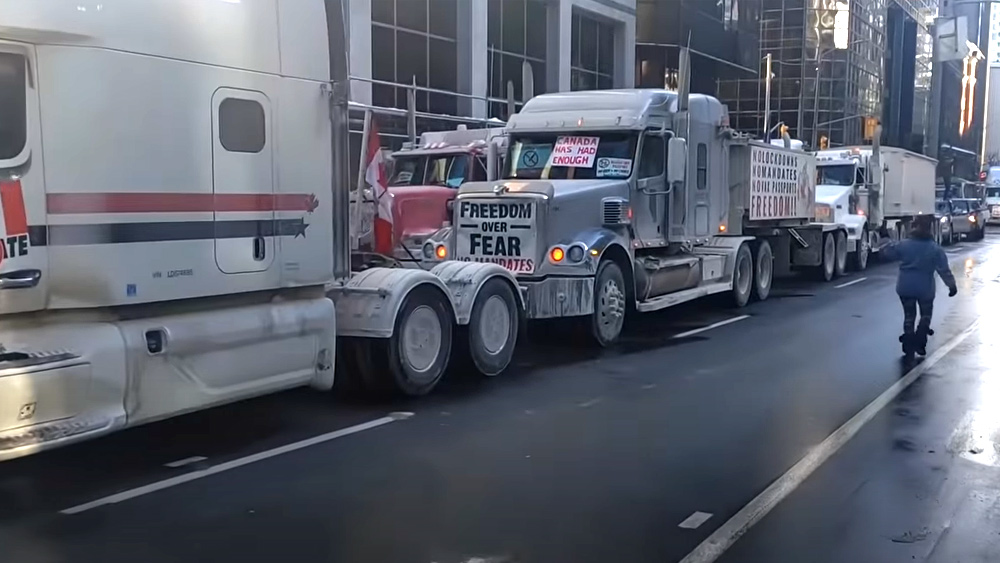 Canada’s Freedom Convoy vowed to stay in the capital city of Ottawa until the government lifts its vaccine mandate for truckers.

The convoy set out from the province of British Columbia on Jan. 23. It headed eastward and arrived in Ottawa six days later on Jan. 29. A report said the organizers initially estimated 1,600 trucks to participate. This later grew to 36,000 and eventually hit close to 50,000 trucks.

Meanwhile, the Ottawa Police Service (OPS) said it reported zero arrests at the Freedom Convoy’s gathering on Parliament Hill on the weekend of Jan. 29 and 30.

A statement by the OPS released in the morning of Jan. 30 said: “large crowds remained in the downtown core throughout the night and were actively managed by police. Officers encountered several challenges with demonstrators, including specific road blockages by trucks, which officers worked to clear. These high-risk situations were de-escalated and resolved with no arrests.”

A later OPS statement released on the evening of Jan. 30 mentioned police officers dealing with “disruptive, inappropriate and threatening behavior from demonstrators.” Despite this, the later statement made no mention of arrests. “Throughout the weekend, the OPS and its partners have been actively and patiently managing a well-funded, major demonstration in the downtown core,” the Jan. 30 statement said. (Related: 50,000 truckers storm Ottawa to demand end to covid “vaccine” mandates.)

Sloly also lauded the OPS members for their response to the protests at the capital. “No riots, no injuries, no deaths. None of that has occurred over the last four days. That is a measure of success for any jurisdiction in Canada, and quite frankly anywhere in the world.”

The Freedom Convoy protests have caused traffic gridlocks and road closures in the Canadian capital. It also caused headaches for business owners and residents in the city’s downtown district.

Despite this, Prime Minister Justin Trudeau has remained adamant with his stance. He said on Jan. 31 that he would not meet with the Freedom Convoy as he does not believe in its goals.

“I have also chosen not to go anywhere near protests that have expressed hateful rhetoric, violence toward fellow citizens and a disrespect not just for science, but the frontline health workers and 90 percent of truckers who have been doing the right thing to keep Canadians safe and put food on our table,” said Trudeau.

The prime minister reiterated his stance in a news conference. “We are not intimidated by those who hurl abuse at small business workers and steal food from the homeless. We won’t cave to those who engage in vandalism. There is no place in our country for threats, violence or hatred.”

Some Canadian journalists claimed that the Freedom Convoy is an invasion and suggested that protest participants may try to breach the Parliament Building. Reports from actual participants painted a radically different picture, however.

Trucker Gord Magill, who joined the protests, denounced the mainstream media (MSM) coverage of the protest. He claimed MSM reports zeroed in on a couple of protesters who do not represent what the convoy stands for. “The [MSM] is clutching at straws to smear us – which are in short supply,” Magill wrote in an op-ed.

Concordia University political science professor Travis Smith, who also attended the protests, painted an optimistic picture of the gathering. He wrote that people of different backgrounds, languages and political affiliations “gathered to donate their time and the fruits of their culinary talents” to offer food to the truckers and other Freedom Convoy participants.

Smith added: “They delivered additional items donated by people who couldn’t make it in person, helped to shuttle people around and offered what other assistance they could.”

“Lockdown” Canadian PM Justin Trudeau relocated out of capital “for his safety” as thousands of truckers protest COVID vaccine mandate.

Watch the video below of Tucker Carlson talking about the Freedom Convoy.

This video is from the Son of the Republic channel on Brighteon.com.

Resist.news has more on the Freedom Convoy’s fight against COVID-19 vaccine mandates.