Why is Trump given a hall pass on killer injections? 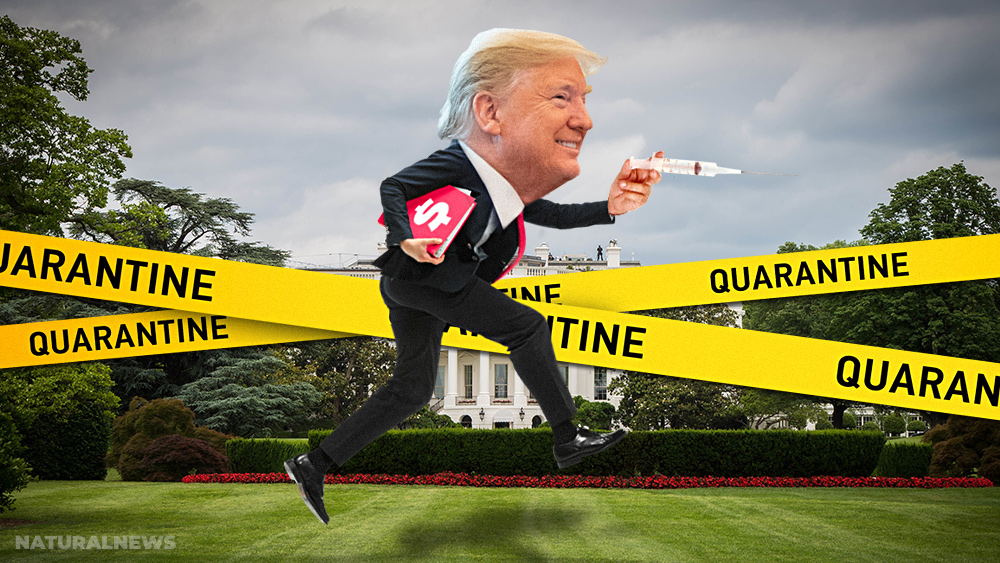 The “vaccines” now being forced on the global population are shaping up to be perhaps the most successful eugenics program in human history, and the scam of the century is that these shots are being sold as a treatment that will keep you healthy, wink, wink.

Even the CDC has admitted the injections have failed to prevent people from getting the very virus it purports to “protect” us from. Nor have they stopped people from being hospitalized and they certainly haven’t stopped the spread. Many of the unjabbed are no doubt catching the virus from their jabbed friends.

The death tally attributed to Covid in 2021 has already exceeded that of 2020 when there was no miracle “vaccine” available. And if we look at the most vaccinated countries in the world, Israel, Gibraltar, Denmark and Singapore, they’ve all been experiencing a surge in deaths attributed to Covid, while the least-vaccinated nations, such as India and nations in central and northern Africa, have the lowest rates of infection and death.

The short video below makes for a great reminder of just how many lies the government and its corporate media lackeys have told in the name of Covid-19, and they continue to get away with telling more lies every day.

Yet, for some reason, former President Trump continues to promote the “vaccine” as though it’s a wonder drug sent from heaven upon him placing a personal take-out order. Trump says it’s a “great vaccine” and thinks everyone should get it.

Not coincidentally, it was Trump’s administration that ordered the first debilitating lockdown in 2020, an unprecedented affair that saw churches and small businesses declared “non-essential” and shuttered while big-box stores and online giant Amazon profited greatly. Today’s supply-chain problems can be traced to that lockdown.

The typical development schedule for a vaccine is 10 years but Trump brags about how several stages of testing were skipped so that the Covid shots could be delivered from Big Pharma to Americans’ arms within months, not years.

So I ask, why is it that Trump gets let off the hook for not only setting what amounts to a globalized eugenics program in motion with his Operation Warp Speed, but now he continues to try to sell these same experimental, gene-altering injections to his supporters as safe and effective?

After being overrun by an army of Soros- and Gates-funded fact-checkers “debunking” that the shots change your genetic code, even Forbes magazine now concedes that the fact checkers were selling us a pile of stinky manure. The shots do change your DNA, just a tiny bit, but it’s good for you, says Forbes healthcare contributor Steven Salzberg.

Since leaving office, Donald Trump has repeatedly encouraged his supporters to receive the mRNA shots offered by Pfizer and Moderna or the viral-vector DNA injections offered by Johnson & Johnson.

Moderna is a relatively new company that shares a patent on its mRNA shots with the National Institutes of Health, an arm of the federal government [no conflict of interest there].

Pfizer and Johnson & Johnson are central players in the biomedical-pharma complex that was created with seed money from the Rockefeller family back in the early 20th century. Both of these players have a checkered history of manufacturing drugs that get approved by the FDA only to later be found to cause serious health side effects, up to and including death. In short, these are criminal enterprises that get cover from the corporate media, which just so happens to feed off of ad revenue provided by these very same criminal enterprises.

Trump claims to be the premier champion of America-first policies. I’ve yet to hear a single reporter, from the left or the right, ask him to explain how it helps America to shoot experimental gene-based “vaccines,” which the chief medical officer of Moderna compared to a computer operating system, into the bodies of every man, woman and child?

Illegal immigration, a serious problem Trump likes to talk about, and rightly so, could destroy the United States as a sovereign nation over a period of a couple of decades. These vaccines have the potential to destroy our country in a couple of years. They are clearly a genocidal bioweapon being waged by globalists against the Western democracies in preparation for the Great Reset, aka global government.

These shots serve as a destroyer of bodies and a disrupter of economies. The goal is that out of the chaos a new system, a new global order, can emerge based on digital, programmable money and a more controlled digital society inhabited by fewer people.

Compliments of The Covid Blog, here are five examples in 2021 in which Donald Trump played cheerleader in chief for the experimental injections that are now killing people by the tens of thousands, causing permanent harm to others, while a complicit corporate media covers it up and social media giants censor and suspend the accounts of truth tellers.

Bartiromo asked Trump if he would recommend “the vaccine” to the Fox News audience:

“I would recommend it to a lot of people who don’t want to get it. And a lot of those people voted for me frankly. We have our freedoms. But it’s a great vaccine. It’s a safe vaccine.”

“A lot of our people don’t want to take vaccines. You know, I don’t know what this is exactly. Republicans? Don’t know what it is. I encourage them to take it. I do.” Hannity then asked Trump if he received the injections. “Yes I did. I had [COVID] and I took [the “vaccine”].”

“That’s the worst thing the FDA could have done” re: pausing the J&J viral vector DNA injection in April after several cases of blood clots.

Here are the rest of his quotes via New York Post columnist Michael Goodwin:

“It’s pretty amazing stuff. If we didn’t have a vaccine, it would have been just like the 1918 Spanish flu. The vaccine is a great thing and people should take advantage of it. Nobody should be forced, we have our freedoms. But I strongly recommend it because it’s a real lifesaver.”

4. Trump tells crowd at Alabama rally: “I recommend [you] take the vaccines.” August 2021

It’s almost like the crowd didn’t know how to react. The “chosen one” is encouraging them all to receive injections of an experimental nature when he’s supposed to be the anti-Fauci. “It was three days less than nine months, and you know what, it’s great… but I recommend taking the vaccines, I did it, it’s good, take the vaccines… But, you got your freedoms but I happened to take the vaccines. If it doesn’t work, you’ll be the first to know… but it is working.”

“I am a strong believer. You wouldn’t have vaccines if it wasn’t for me. And, please, I love our people. So I want our people to take the vaccines.”

Fredericks chimed in and said he got the Moderna injection, helping the former president push his narrative that Covid “vaccines” are good for us. I wonder if Fredericks and Trump have made their appointments for their “boosters” yet.

Let’s be clear. Trump won the 2020 election, which was stolen by the deep state and handed to the illegitimate administration of Joe Biden. Trump should be the president right now, period. But that does not mean we should gloss over or ignore his fatal flaw, which just happens to be the biggest issue in the world right now and could even evolve into something biblical, something like the mark of the beast. If you think that sounds crazy, you haven’t been paying attention.

Almost every nation seems to be operating from the same script, either directly forcing people to get these shots, or, in the case of Biden, using private corporations to force them on their employees.

Sweden is already experimenting with a program that lets you get your digital vaccine passport in a chip in your hand. Governments all over the world are experimenting with tying everyone’s identity and bank account to their vaccination status. So let’s stop trying to deny where this is heading. We all know where it’s leading and that, left alone, it’s going to bulldoze every ounce of freedom left in the world.

It’s time to end this global beast system before it gets too far down the road of implementation. And the one man who has the biggest power base behind him, and could turn millions against the vaccine with a mere word from his mouth, refuses to do so. It’s time to swallow your pride, Mr. Trump, and admit your “vaccines” are a complete and utter failure, and must be stopped immediately. The cost of not doing so is immeasurable in terms of human lives lost through miscarriages, blood clots, strokes, cardiac arrest due to inflammation of young hearts, and untold numbers of sterilizations. You can’t say you are pro-life and support these injections, and that goes for everyone, not just Trump.