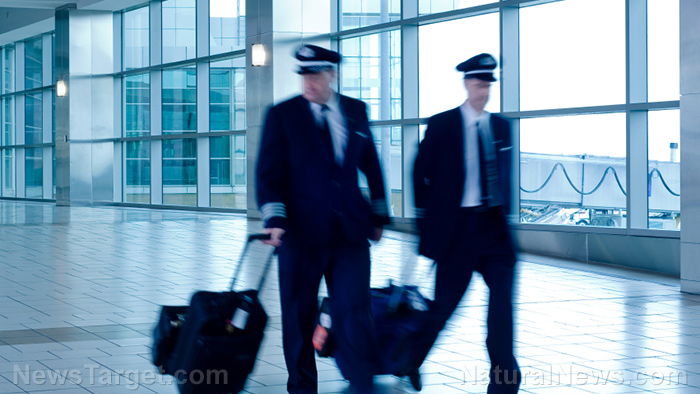 Pilots are dying within days after taking the Wuhan coronavirus (COVID-19) vaccines, sometimes midflight. While mainstream media outlets are quick to cover up these deaths, independent journalist and political commentator Scott Kesterson said the reports are real and he has personally confirmed at least one death of a pilot midflight.

Kesterson made this statement on Thursday, Oct. 28, during his program “BardsFM” on Brighteon.TV.

News came out in mid-October that a pilot for Delta Airlines died during a flight within days after getting vaccinated against COVID-19. This claim is according to Dr. Jane Ruby, a former drug development expert at the Food and Drug Administration (FDA).

According to Ruby, a recently vaccinated pilot for the airline died during a commercial flight shortly after taking off from Los Angeles. This forced the co-pilot to make an emergency landing.

“The co-pilot told the flight attendant that the captain was speaking normally one moment, then … said a few weird things, then died,” said Ruby. “The flight had to make an emergency landing.”

Without revealing the identities of her sources, Ruby said they have been vetted and that they are all employees of Delta Airlines and that one of them is a pilot and another is a flight attendant who witnessed the event.

According to Ruby, the co-pilot informed the flight crew that the pilot who died had “completed his second shot” just “several days prior” to the tragic flight.

Delta Airlines was quick to react to this story with denial. Mainstream media has come to the airline company’s aid with multiple articles claiming to have “fact-checked” the story as a complete falsehood.

But Kesterson believes Ruby is telling the truth after verifying the story with his own sources.

“Those claims are true, and there’s more to come on this,” said Kesterson.

“But it’s a part of this … diabolical plan that we’re dealing with, which is to force the injection upon everybody – which is nothing more than a bioweapon – knowing that this is going to execute a slow and steady die off within key sectors of our country and leaving us vulnerable, both for just basic functioning of our infrastructure and also vulnerable for our enemies.” (Related: Scott Kesterson: Fear of COVID-19 is carefully ENGINEERED to compel people to get vaccinated – Brighteon.TV.)

Many pilots have died after taking vaccines

The Delta Airlines incident is not the first time a recently vaccinated pilot died midflight, endangering hundreds of people on board their planes.

Ruby herself mentioned knowing about at least two other pilots who died due to the COVID-19 vaccines. In one incident, a pilot in Seattle was found dead in his home due to an embolism caused by the vaccine. In another incident, a pilot in Salt Lake City caught COVID-19 from the vaccine and later died of kidney failure after being put on remdesivir.

Back in June, four pilots for British Airways all died within days of each other due to the COVID-19 vaccines.

Kesterson’s advice to his viewers is to “use some common sense.” This means thinking twice before boarding a flight, especially with an airline that has mandated COVID-19 vaccinations for its pilots and other flight crew.

“I stopped flying the minute they mandated the face mask,” said Kesterson. “And that was out of a principle that I wasn’t going to be told to put something over my face over something that I knew was fake to begin with.”

“I refuse to fly anywhere anymore,” he continued. “And I won’t. I just think it’s a bad decision to do so. And I’ve heard many, many people say, ‘Well, I have to fly because of business.’ On top of the injection issues, you’re now having to consider another threat, which is, is the plane going to land safely?”

Kesterson has a lot more to say regarding COVID-19 vaccine mandates and how they are killing skilled people in essential industries. Watch the full Oct. 28 episode of “BardsFM” with Scott Kesterson here:

“BardsFM” with Scott Kesterson airs every Thursday at 5-6 p.m. on Brighteon.TV.

Learn more about how the COVID-19 vaccine mandates are killing otherwise healthy people by reading the latest articles at Vaccines.news.