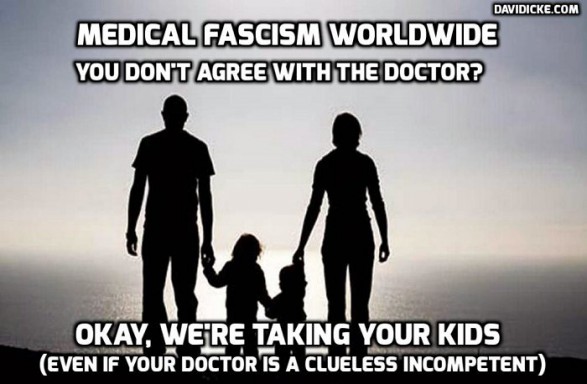 A four-year-old boy has been victimized by Child Protective Services (CPS) in Texas after the government agency accused the boy’s family of “exaggerating and lying about” his “symptoms and conditions,” relating to a medical condition for which he was diagnosed.

According to reports, on June 20, CPS conducted a “Soviet-style” raid on the Pardo family, seizing little Drake because his mother, Ashley, had demanded what authorities claim is “an unnecessary surgical procedure to place a G-tube” inside his body.

The Pardo family had previously filed a complaint against the Children’s Medical Center in Texas for alleged negligence after doctors at the facility refused to see the boy for this procedure. Later, after missing an appointment at the hospital, the Pardo family became targets of CPS, which decided to perform a state-sponsored medical kidnapping of Drake.

A court order gave clearance for CPS to perform an “emergency removal” of Drake from the home, which is just one of many gross abuses of power that the Drake family says they had no choice but to comply with, seeing as how CPS officers were armed and ready for action.

On July 2, the Pardo family tried, but failed, to get Drake back from CPS. On August 2, they filed two emergency motions asking the Court of Appeals for an emergency intervention, though this, too, was denied after the court decided that Drake is now receiving “proper medical care.”

On August 9, there was a status hearing that was held on the case to determine what should happen next, and if Drake should be returned to his family. During this hearing, a CPS caseworker decided that “Ashley and Daniel Pardo had to make a complete admission of guilt before they can get their son back.”

More stories about the government kidnapping of children can be found at Tyranny.news.

Similar to what’s happened with other CPS cases we’ve reported on, the Pardo family was raided, and their son seized, without any sort of due process. It also all happened so quickly that, by the time the Pardos were able to make heads or tails as to what was going on, young Drake had already been kidnapped.

Working alongside lawyers from the Texas Home School Coalition, the Pardos are trying to get the message out that they weren’t even told about the meeting with Dr. Suzanne Dakil at Dallas Children’s Medical Center that they supposedly “skipped,” this being what CPS used as an excuse to kidnap Drake.

Because of this lack of communication, the Pardos were quickly labeled as “child abusers” for supposedly not providing Drake with the ‘appropriate medical care’ he needed in order to regain his health.

CPS is claiming that two different gastrointestinal (GI) doctors advised the Pardos against the procedure that Ashley wanted Drake to get, but that Ashley had demanded to see a third GI doctor, which is what ultimately pushed CPS to take action. But Jeremy Newman, the director of public policy for the Texas Home School Coalition, insists that Dr. Dakil, who appears to have orchestrated this abduction it, isn’t telling the truth.

“According to Dr. Dakil’s uncontested testimony at the hearing, the family has only switched doctors one time,” Newman is quoted as saying.

“They switched from one doctor inside Children’s to another doctor inside the exact same office. The reason for this switch, which Dr. Dakil admitted she was not aware of the reason, is because the first doctor refused to visit Drake for several days while he was admitted to the hospital. The family fired him, switched to another doctor in the same office, and filed a formal complaint against the first doctor.”