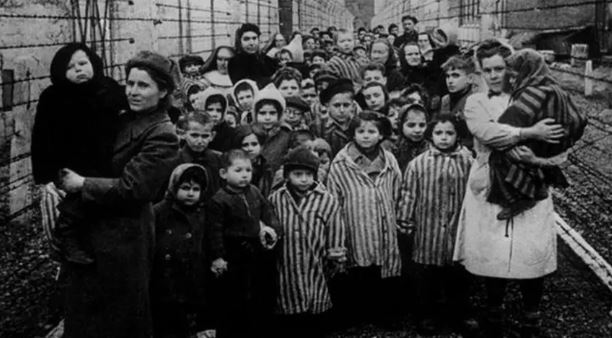 Is the State of New York trying to sterilize the orthodox Jews using forced vaccination? Currently, four zip codes are under siege by Adolf de Blasio, the Fuhrer of the Big Apple who has zeroed-in on the Jews as, once again, a scapegoat for medical experimentation trials. He claims his police “disease detectives” (think armed-to-the-teeth SS guards here) can simply interview suspects (of the Measles) and then force-vaccinate them at gunpoint with a stranger’s abortion cells, neomycin, sorbitol, genetically modified human blood cells, and animal waste (yes, urea is animal urine) – and these are just a few of the neurotoxic ingredients in the latest MMR (measles, mumps, rubella) jab.

Welcome to Nazi America, where in New York, the Mayor says it’s time to shoot up some religious scapegoats and their offspring with some concentrated MSG (yes, monosodium glutamate) and hydrolyzed animal hides, muscles and hooves (that’s gelatin reduced from cows and pigs). And yes, we’re still talking about ingredients in the MMR vaccine.

And, no, vaccines are not kosher, or safe, or effective. That’s was all just a lie, all dating back to the Polio vaccine. Many vaccines, like the MMR, contain the cells from human abortions, thus making anyone who “consumes” (gets injected with) vaccine toxins a cannibal. Does the MMR contain any other agents that cause infertility or deformation in offspring? Autism? Is this population control by vaccine genocide of orthodox Jews? How can we know, when the CDC won’t run the clinical trials and safety research?

Is Adolf de Blasio sending a swat team to hold your children down and shoot genetically modified E. coli bacteria into their muscle tissue? What’s the end goal on this one? You better wake up and smell that toxic “cup of coffee” right away. Get prepared. Now you know what all the “preppers” have been talking about for the past 10 years (nanny-state police takeover).

So, when some paramilitary-style New York cops (or ones from your city) come banging down your front door at 4 a.m. like the WWII “Schutzstaffel” to check for your children’s mass-vaccination papers, hide your children’s symptoms and keep your automatic weapons nearby, because we all know the “Re-education” camps aren’t far away – think FEMA and every single one of America’s giant football stadiums here, with movie screens and medical check points, with barbed wire fences all the way around the perimeter. This is why the Democrats want your guns, folks, and not just the “automatic” ones, but all of them.

Remember, the Nazis sought to control every part of public life, just like Pelosi, Schumer, and AOC want to now

Shall there now be NO informed consent for orthodox Jews everywhere in the USA, starting this summer or fall? Is New York setting the precedent for the upcoming experimental candida auris “vaccine?” Has the USA’s version of Orwell’s “1984” gone full-metal-jacket on us already? Many Jewish grandparents and great-grandparents remember how the Nazis took control. Heck, the Nazi racial policies served the core of their psychopathic “ideals” (think master race here).

It was fear, propaganda, and chemicals that served as Hitler’s “right wing” – but instead of Bayer or Monsanto, they were called IG Farben (short for Interessengemeinschaft Farben). Whenever Hitler took over a new country, he would replace their “drug stores” with his own, and the IG Farben pharmaceutical regime helped him weaken the enemy (think MMR II here, and flu shots loaded with brain-damaging mercury).

Hitler and his Nazi Party (think Russia-Collusion impeachment hoaxers here) also used propaganda, including leaflets, posters, and short films to convince everyone that the Jews, the elderly, the handicapped, and the autistic humans should all be exterminated because he said they were a financial burden on society and the welfare of Germany. The Jews, senior citizens, and the mentally challenged were basically the “basket of deplorables” of World War II. Just switch a letter around and add a “t” to Hillary and you’ve got Hitlery.

So, just to recap, New York’s Mayor, Bill de Blasio declared a state of emergency over a measles outbreak. (Think if Trump declared a national emergency over a chicken pox outbreak and wanted to force vaccinate everyone, how insane the media coverage would be.) What if most or all of the kids de Blasio has singled out were black or gay? How would that go over with the media and Hollywood?

And where is the AMA in all of this, with their sworn code of ethics? Are we forcibly putting Jewish children in harm’s way via medical violence? The vaccine industry has already doled out over $4 BILLION in injury compensation and settlements handled by their secret court with their self-appointed judges.

Forget about the first amendment, how much can Big Pharma bankroll off sickness before recalling dangerous, experimental drugs and vaccines? That’s the question they’re always asking. Merck and Pfizer usually wait until the lawsuits start squeezing the profits too tight, then they do the recall.

Tune in to Vaccines.news for more info on Communist and Nazi-style medical tyranny taking place on U.S. soil.